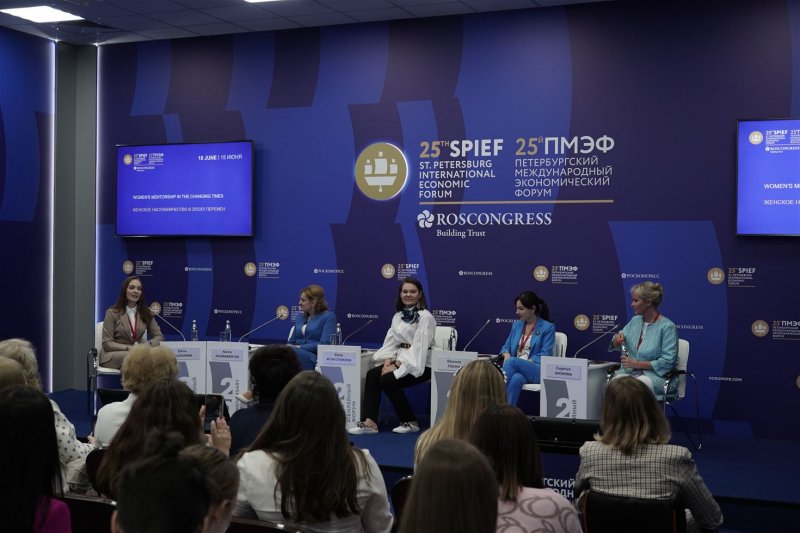 On June 15, the XXV St. Petersburg International Economic Forum has started. SUAI rector Yulia Antokhina spoke at a panel discussion within the framework of the "Women: Mentoring School" large-scale federal project. The project was initiated by the Ministry of Science and Higher Education of Russia and is aimed at supporting students and young professionals. The first season of the project started at the end of April. 75 female leaders from the Russian business sphere, state corporations, public organizations, authorities and other spheres act as mentors. For several months they have been mentoring and helping about 100 university students from different regions of the country to start their career path. It is important to note that the "Women: Mentoring School" project received the support of the Federation Council.

The panel discussion "Women's mentoring in the era of Change" was opened by Deputy Minister of Science and Higher Education of Russia Elena Druzhinina. The leading mentors of the project made presentations on how the request from young girls is changing, what has changed in the mentoring process today and what challenges women face when building a career.

– The School of Female Mentoring is a very well-timed project. Right now, creating conditions for the development of women's entrepreneurship is not just the economic growth and the emergence of new jobs, women's entrepreneurship is the ability to see problems from the other side and to find non–standard solutions. And this is exactly what our country needs right now! – says the rector of SUAI Yulia Antokhina.